At present, more than 80% of the WiFi devices in the world are tested by LitePoint instruments, and almost all of these WiFi devices are designed and manufactured in Taiwan, which is a milestone in the field of wireless communication. On the other hand, consumers' demand for diversified value-added services of mobile phones must be built on the basis of higher-speed and wider bandwidth wireless communication networks. Therefore, the current 2G / 3G is not enough, and the implementation of LTE technology will become a must in the future. Trend. However, LTE communication test equipment on the market has disadvantages such as high price and long test time. Therefore, in order to accelerate the development of LTE-related products, LitePoint has released the IQxstream mobile test system, which is compatible with 2G / 3G / 4G. It also supports FDD (Frequency Division Duplexing) and TDD (TIme Division Duplexing), and provides the ability to simultaneously test 4 DUTs (Device Under Test), which is sufficient to respond to future test trends.

Predicting the growth rate of the wireless network market also shows the future prospects of wireless communication test equipment. Vernon Rogers, LitePoint's business director, said: "In 2011, global shipments of smartphones and tablets are expected to reach 5 million units, and will grow to 8 million units in 2013. If the population and Internet devices are Computers, laptops, smartphones, and tablets), the world â€™s population dating back to 1993 was 5.5 billion, when there were only 1 million computers worldwide; the population is expected to reach 76 in 2020 Billion, but the Internet device has a record of 10 billion units. "In other words, each person has an average of 1.3 Internet devices, which shows that with the explosive growth of wireless networks, the market demand for wireless communication testing is driven by demand. In fact, the globalization of wireless network demand is an unstoppable world trend. For example, the global sales of mobile phones and PCs in 2009 were 1.2 billion and 3 million units, respectively, and 40 mobile phones were produced every second. These all show the possibility of having 50 billion wireless network connection points in the world by 2025, which is another perspective of the wireless communication test market.

From the evolution of 2G to LTE, the difficulties encountered in the development of related mobile communication products are not only the increase in test complexity, but also the need to reduce test time, thereby reducing production costs and meeting requirements such as entry-level smartphones (average selling price (Between 100-150 US dollars) required for such products. Not only that, but it also bears the pressure of the development schedule in order to launch new products faster than competitors. In the past, it took an average of 12 to 18 months from the idea stage to the consumer to buy the product, but now it is shortened to 6 to 12 months, highlighting the importance of timeliness. With the help of IQxstream, the above-mentioned LTE product development challenges will be solved comprehensively. The reason is that IQxstream has four major characteristics including Simple, Proven, Fastest and Safe Investment.

The so-called Simple refers to IQxstream's built-in multiple mainstream measurement methods, and supports multiple standards such as LTE FDD / TDD, GSM / EDGE, W-CDMA, CDMA 2000, TD-SCDMA, etc. Test software is easy to write. In addition, due to the close relationship between LitePoint and communication chip manufacturers, it is possible to ensure the support of the test solution. For example, obtaining QUALCOMM's FTTL (Factory Test Technology License) certification is an example. Proven's advantages can be seen here. 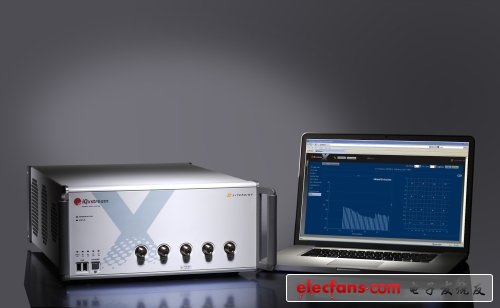 As mentioned above, IQxstream can support 4 DUT (MulTI-DUT) tests at a time, thus greatly reducing the test time, and using UMT (UTIlizaTIon Maximizing Technology) design as a high-speed transfer architecture, which is the essence of Fastest. Of course, the investment in wireless communication test equipment will also consider the product's support and after-sales service. Therefore, IQxstream has sufficient reserve bandwidth to maintain the flexibility of upgrading the next-generation LTE technology standard, and in Taipei, Shanghai, Tokyo, Shenzhen, Chicago and Europe all have regional technical departments to provide comprehensive testing technical support more efficiently.

In addition to its own design features, IQxstream can also meet the reasons for LTE testing, except that the specifications meet the following conditions. The first is the RF frequency range, which needs to be between 698MHz and 2.62GHz, and IQxstream is 400 to 3000MHz. Furthermore, the test equipment has at least 20MHz VSA / VSG bandwidth and supports 6-channel design. To maintain future scalability, it is necessary to further support LTE's next-generation LTE-Advanced, because the bandwidth must be increased to 100MHz. For the testing needs of R & D and manufacturing units, the built-in accurate MIMO (Multi-input Multi-output) function is an indispensable element, and an additional VSA / VSG port is provided for uplink and downlink MIMO signals Special applications for delivery. Not only that, for the uplink and downlink, it supports different transmission combinations, as well as FDD and TDD transmission modes. In addition, the number of frequency bands combined by FDD and TDD needs to reach 40, FDD from 1 to 17, the frequency is less than 2.7GHz; TDD frequency band is 33 to 40, the frequency needs to be lower than 2.62GHz.

In fact, many of the features of IQxstream are based on non-signaling (Non Signaling) mode. Compared with the Signaling mode, Non Signaling has no Protocol Stack, and does not need to go through the RF Channel, and directly connects to the control terminal through an interface such as USB. Therefore, in addition to effectively mastering test errors, it also enjoys higher-speed device control (USB 2.0, 480Mbps vs RF, 64Kbps), and can quickly configure the device and test, reducing the time required to change the device configuration. At this time, the measurement method can also be prepared before the device is configured, and there is no need to wait for the connection signal.