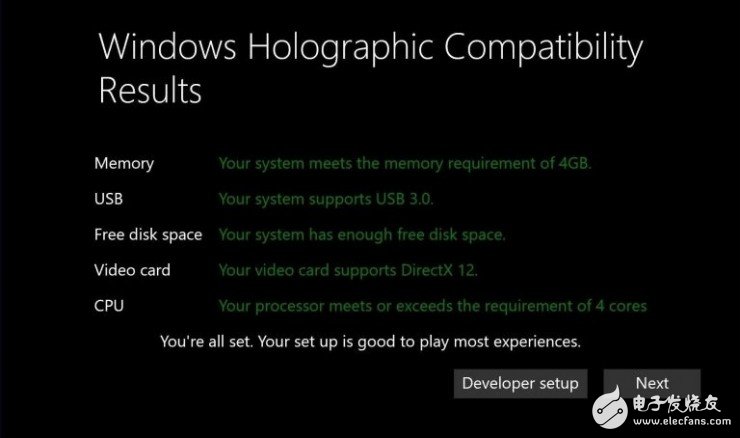 From the above requirements alone, some of the 2009 AMD Athlon II series, as well as the 2010 NVIDIA GT 400 series can be up to standard. This means that all kinds of old computers, even low-end notebooks, can be driven.

However, according to the Microsoft Compatibility Project, such performance will be enough to "play the most (Windows Holographic) experience."

Considering that Vive and Rift have had a bit of a discount when running on a minimally configured PC, Microsoft's minimum configuration is likely to fail to run most of the two big-headed games.

However, Microsoft does not particularly emphasize the game experience in various related publicity, but there are many 3D applications, similar to those on HoloLens. The configuration of HoloLens is not high, its processor is Intel Atom x5-Z8100 (1.04 GHz, 14nm, 4 core, 64 bit), GPU/HPU is Holographic Processing Unit (28nm, 24*Tensilica DSP, 8MB SRAM, 1GB) DDR3 RAM), the memory is only 2GB.

Therefore, the minimum configuration PC required by Windows Holographic should only experience the AR/VR experience similar to HoloLens. If you want to play large VR games, higher configuration is inevitable.